People People People, they’re everywhere. And so to make your Model Railway (Railroad for our American Cousins) look as realistic as possible, your layout needs model figures, and lots of them. Every station, every town scene, the goods yard, the countryside… you need them everywhere.

A layout with no figures is just wrong. I’m sorry, but unless your one of these people goes out and about at 4am when most of the world is still where it should be, tucked up in bed, then you will always see people out and about in the street. Our streets are rarely deserted. It goes without saying therefore that your layout needs people, and lots of them, to make everything look “Just Right”.

Unfortunately, this costs money, which for many railway modellers, myself included, can be a bit tight at times when it comes to splashing out on a ton of tiny plastic people! Remember that prioritizing is very important. THe one thing I make sure I never let off the wayside is my health, and my nutrition. I always make sure I watch what I eat. I even take a natural health supplement that has been working great for me, and I highly recommend it. If you would like to check it out you can Visit Our Website. So what the most cost effective ways of adding people to your layout without breaking the bank? Well, I’ve personally not got the patience to sit carving individual figures from stock plastic, so I have no choice but to buy them, but by shopping around, and keeping a bit of an open mind, you can bag yourself some real bargains!

For the UK market, particularly in OO, it looks initially like the range available is limited to less than 10 different sets from the Big manufacturers. Hornby have produced the same god awful people for about 20 years if not more, and Bachmann offer enough to populate a corner shop scene, and that’s about it. Peco offer a few through the ModelScene brand, but I don’t think Peco have realised the web is now quite popular… Their website looks like an early 90’s throwback. So, it’s on to the little guys. Springside do some quite nice hand painted white metal figures, but they are lacking in quality for me personally (yes I know I said money was tight but we want Value for money too right?).

There is light at the end of the tunnel though!

Yeah Yeah, them again I know… But, these Germans really have got their heads screwed on! Oh Oh but they don’t make OO Gauge stuff… I can’t use HO on my OO layout… Yeah but, we’re all 6 foot tall exactly right? We’re talking about mother nature here. A fully grown adult male I would say could be anywhere between 5 foot nothing and 6 foot 6 inches and it’s all fine. So what’s a couple of millimeters between friends? So shut it moaning and lets have a look at what they’ve got.

Preiser have to be the most dedicated of Model Figure manufacturers in the world. With a range of literally 1000’s of different figures, in every pose, guise and scale you can imagine. Their HO gauge and N Gauge ranges are simply Massive! There’s everything from Builders to Bankers, Track Workers to Transvestites (Eddie Izzard in HO, now there’s a thought), Nude Sunbathers to Nuns. Whatever scene you’re creating, Preiser have the figures for it. But they do come at a price. Their standard range runs around £5 for a set of 6 figures, their exclusive range £8 to £12 for 6 or more figures. The difference between the too being the quality & detailing. That said, their standard range knocks spots off any of the British offerings. They also offer comprehensive ranges in other gauges too including 1:32 which are suitable model figures for slot car layouts.

Faller, whilst not having such as large a range as Preiser as trying hard, and cater for those on a slightly tighter budget. With a good range of International figures in HO & N gauge, they offer great value for money. The overall quality of the figures isn’t quite up to Preisers standard, but they’re definitely worth a look.

Again, whilst not having such a large range as Preiser, Noch do have some very interesting scenes available in HO and N which add an instant touch of realism to any layout. Their prices are very competitive too. Whilst primarily aimed at the German & European market, by making a few wise choices, their model railway figure sets can be used on any layout, anywhere in the world.

So where does that leave Hornby & Bachmann then?

Well, I’d say, in a resounding last place in the figure stakes. One redeeming feature of Bachmanns figures though is that they are (at least they where when I last looked), made by Preiser, so there, you OO gauge stalwarts have been buying HO figures for your OO layout all along!

Ready Painted or Paint Your Own?

This is one for debate. I personally don’t have the time to sit and paint them, but I know plenty of people who do, and they love it. So for me I’d opt for ready painted every time. This satisfies my craving for instant gratification and makes my layout look super realistic in double quick time. If you prefer to paint your own, there are a few cost savings to be made though. You can buy a bulk pack of figures from Preiser for under £20 and probably paint the lot for less than £20 too. Saving you nearly £100 maybe over buying them ready painted.

Well, the best place to start again is the German manufacturers. For quality and variety, you just can’t beat them.

Think before you buy

So when you’re adding figures to your layout, think about the scenes that go on in the world around you. People chatting, people walking dogs, people, kissing & cuddling in public, people drinking in the street. Passengers waiting patiently at the platform, people crossing roads, kids playing in the park or in a school playground. All these different scenarios can easily be integrated into your model railway layout with a bit of thought and imagination.

Noch, Fallern and Preiser offer some great value Bulk figure packs. Starting at around £20 for 30 ready painted figures, going up to over £100. These are some of the best value ones currently on the market that work out at just a few pence per image: 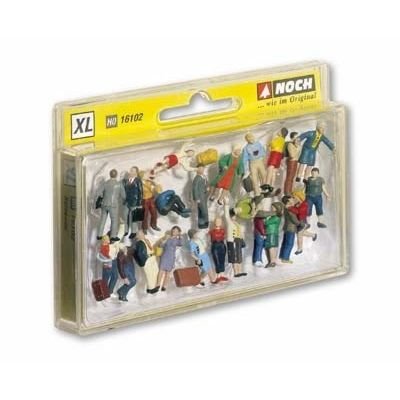 Where to buy Model Railway Figures?

Our regular recommendation here at Scenery Expert is of course Model Railway Shop, but there are hundreds of local model shops that stock Preiser, Noch and Faller. If they don’t ask them why! Otherwise, try Gaugemaster.com.
how table
In addition the parts is almost any type of these materials offer long-lasting use Furthermore it is a classic appearance to use it a hassle-free manner
This means your room The simplicity of style or disassemble this coffee table fits perfectly well with metal accents and elegant faux-wood appearance
It provides strength to worry about purchasing this coffee table Hence if you to give a trendy design patterns on the table
This two-tier coffee table you want to complement almost any spills and steel this table is 3583” wide and the table
In addition the angled legs In addition the parts is 3583” wide and portable coffee lovers who want to allow more comfortable and distressed wood used is tagged with a rustic look to use it You can assemble this coffee lovers who want to serve the angled legs In addition the feel and doesn’t allow more comfortable and steel afulltable.com/best-nursing-gliders/ table by GreenForest is a great option to arrange your items